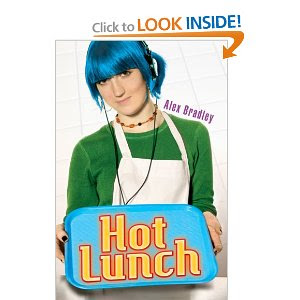 By: Alex Bradley
Rating: No swearing, no violence, no sexual stuff
Synopsis: Molly, a rude, selfish, sophomore, gets into a food fight with Cassie, an annoyingly perky blonde, which causes the lunch lady, Mrs. Zetz, to retire. And instead of getting detention they have to do lunch duty, the horror! But even worse the principal, Dr. John, insists on having the the students that order hot lunch fill out a ballot asking, whose food was better, Mrs. Zetz’s or Molly and Cassie’s? Their food ends up getting destroyed each time, causing them to have to work in the kitchen even longer. Then a total geek, Clyde volunteers to help cook. That would be great, except for the fact he can’t cook. Clyde likes Molly but sadly, she turns him down in a way I’d call burning. Meanwhile, Molly is drooling over Devon, an eye-candy actor with a hot butt. There’s also another guy she actually ends up with, so it’s kind of like a midsummers night dream, except all the girl parts were given to one chick. Just as Molly and Cassie start to enjoy working in the kitchen, Mrs. Zetz returns!


My Review: I enjoyed this book, though I think that some of the characters needed a little work. Molly started out sorta b*tchy . Ex: she hates Cassie at first site because she’s “normal” (what does that even mean?). Later on she grew on me as her narrating became less biased and she wasn’t as rude. Another thing that puzzled me was the punishment, though the payoff was awesome. Why didn’t they do the grunt work like lifting boxes and instead had to be head cooks whose food was compared to someone who had experience cooking? The book had some plot twists, which I’m not saying because, well, spoilers (yes, I’m a Doctor Who nerd). The book was also well written and all in all, a good read.
Posted by A Lemon at 3:31 PM