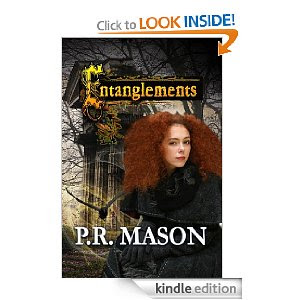 Yeah, this book's by the same author as the last.

Five Lemons –The best meringue pie you ever had!

Rating: Has making out and swearing, but no graphic violence.

Synopsis: Kizzy Taylor returns to school after leaving for about a month due to reasons of her dad attempting to kill her and succeeding in killing her brother, Adam. She has holes in her memory and the memories she sort of remembers don't make sense. She ends up meeting a hot guy named Rom who talks like he's from an old movie and has a weird accent (sorta Italian, sorta not) who both weirds her out and makes her want to jump his bones. That might just be the fact that he's hot though. Going spelunking with her friends in an old hospital she accidentally opens a portal to another dimension, losing her friend and her stepsister. She's going to have to deal with ghouls, vampires (not the cute sparkly kind), and a boyfriend who doesn't say everything he knows to get them back.

My review: Okay, you probably guessed that I liked this book already and you're right. Like the other book, this one was funny (The Baronet of Douche? Hilarious!), obviously knew what it was talking about, and had scenes that would make you blush as you read. Kizzy wasn't flawless, far from it, and didn't come off as annoyingly stupid. When reading it I didn't go 'If I was her I would blankety blank, why'd ya do that?' Though not my new favorite book (I've still got my copy of Good Omens) it definitely made the list. I also blame this author for writing stoic and bad-boy characters well enough that I don't hate the tropes anymore. They are actual characters first, things girls like in a guy second. I used to like to pretend to have conversations with character types (don't ask, I was a weird lemon who had to much free time and didn't yet have a computer of my own). Mostly it would be like, 'oh, hello granola child, do you want soy milk or green tea?’ Somehow the stoic guys and bad-boys would end up slapped. In Entanglements and The Banshee and The Linebacker, the love interests crack jokes, smile, express weaknesses that make sense. And I think that might be why these books are as good as chocolate. When you're reading a book that revolves around a romance, you want a writer who can write for both genders.