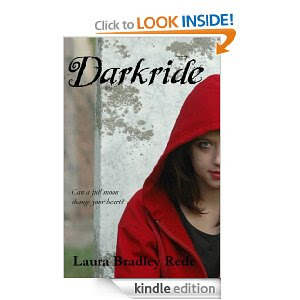 Synopsis: Cicely has been in love with her best friend Ander for what seems like forever. What she doesn't know is that Ander's a werewolf, who likes her back but can't actually express his feelings without the risk of accidentally turning into a wolf. She also doesn't know that she's the last remaining descendant of a witch who cursed vampires with mortality, which they want taken away. The spell can only be removed if she is killed in a special ritual. However, the vampire who's sent to rescue her is the still-heart-broken guy who was her ancestor's old beau. He's decided to break her heart before breaking her body. So, after a failed first date with Ander (he never showed up and may have accidentally put her mom in the hospital) in comes Luke. Handsome, smart and knows lines from Romeo and Juliet. He's literally perfect-guy incarnate. He also happens to be stalking her. So, as halloween approaches, Cicely's going to have to face Hunters, vamps and even some growling wolves, not to mention two guys who like her who are in a constant state of arguing.

Review: This book was good in how it tackled the whole preexisting-monster thing. It's not Twilight 2.0 and it doesn't make vampires and werewolves hate each other (where did that even come from, Underworld?). The male leads have reasons to dislike the romantic rival. When it does introduce new concepts to the classic myths, it does it with more delicacy then a sparkly vampire. You saw the story from multiple points of view, instead of just one person, which really helped move the story forward. The side characters were just as interesting as the mains, not just resorting to stereotypes. Also, it mentions a blood bar (where the waitresses are the drinks) and that might have been my favorite part of the book. It might be a little fast-paced during the end but it promises some interesting twists and turns that you won't see coming.