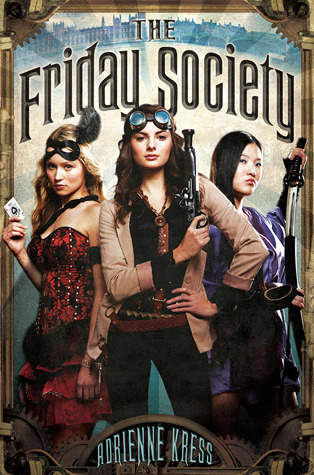 Rating: Swearing and kissing, I guess, but only in minor quantities.
4 Lemons- Lemon ice
Summary: In an alternate steampunk past, three girls work as assistants to powerful London society men. Mainly they're ignored, seen as ornaments rather then thinking, you know, people. But, as these things often happen, they keep running into each other, as well as the dead bodies in a string of connected murders. There's (and yes, I'm doing the listing format a lot now. It's useful when describing several characters.) :
-Cora, who works for Lord White who when he's not working in parliament is a inventor of deranged weapons, a former flower seller with a nasty temper,
-Nellie the flirty magicians assistant who can pick any lock and scale any building,
-And finally Michiko an immigrant from Japan who has no choice but to work for her horrible boss in a job because it's the only way she'll be allowed to fight.
So it's up to these intrepid three to save the day, have some fun, and kick some serious-
Review: Okay, I'll admit. I'm biased. It's a steampunk book! So if you're not in the mood for gadgets, goggles, and gizmos, though I know almost no one who isn't, you might like this book slightly less. The characters are varied and each of the girls has a distinctly different personality rather then the sadly prominent cookie-cutter generic brand to satisfy all, which ends up leaving everyone feeling 'meh'. Also, it's funny so there's that too. Once again, unfortunately, my favorite part was something that will ruin the book if I say it... so... twiddling our thumbs here. Okay, it was kind of annoying how all of them were constantly described as being pretty. Yes, that probably got you places in London society, yes, it's a fantasy, yes, I'm all for a positive body image, yes it makes sense in Nellies case, but I'd like more books where the heroine either a) just, you know, isn't described as either ugly or pretty and I bring up the ugly thing because dear Lord (Note: Doesn't happen in this book, another positive thing) if I read b) the hero tell her she's ever so pretty and it turns out she's secretly the most beautiful thing in the world ever.
Okay. Off topic. This is a good book, if with minor faults and I suggest trying it.
Posted by A Lemon at 4:47 PM