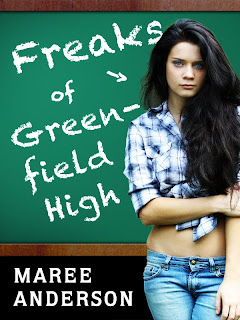 The Freaks Of Greenfield High

Synopsis: Jay, a teenage cyborg on the run from the ‘bad people’, ends up hiding in Snapperton, and meets Tyler, an artistic music loving boy. Tyler and Jay quickly become friends, though without the unintentional help from Shawn, a cheating football brain, they wouldn’t have become so close. Tyler’s sister, Caro, also befriends Jay. After a little while Jay and Tyler fall in love, eventually though Jay has to tell Tyler and Caro about her being cyborg, Caro gets very excited, and Tyler gets really offended for some reason. (God, and I thought I was sensitive.) After a little while the ‘bad people’ track down Jay, will she make it out alive? Or as alive a cyborg can be.

Review: I loved this book! Definitely one of my favorites, I thought all of the characters were awesome, though Jay, of course, was my favorite. My favorite part was when Jay kicked Shawn’s a**, and threw him in a dumpster(Note from Lemon: This is true, she mentioned it at least 5 times during lunch period.), I also thought it was funny the way Jay studied people like textbooks. But one of the things that did bother me was Tyler’s reaction to Jay being a cyborg, all he did was whine about how she should be human, he even slapped her! I personally, would have been thrilled, I mean a cyborg for a friend, that would be awesome. I also found it interesting that Caro’s best friend, Vanessa, was a drug dealer, and her ex-boyfriend, Shawn, was on steroids when they were dating and didn’t tell her. I did like Caro very much, she had a strong personality and is all about fashion. Shawn, Caro’s ex, however I did not like very much, though he did add to the story by hitting on Jay and getting hit by Jay. The only left to say is that even if you’re a cyborg, in a place as complicated as high school, knowing everything just isn’t enough.
Posted by A Lemon at 5:03 PM